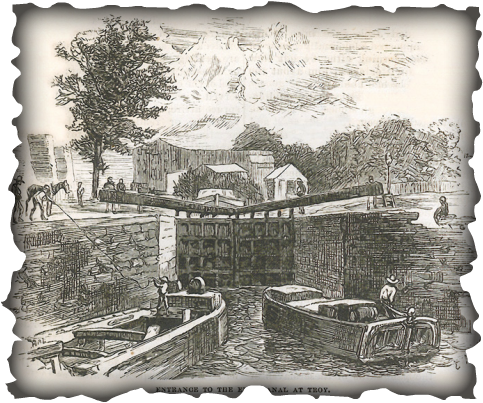 "Entrance to the Erie Canal at Troy". Retrieved from http://eriecanal.org/east-2.html
The Erie Canal began as national political effort, a cross-state canal that would help establish the United States' place in North American affairs.  Without the support of President Thomas Jefferson and then James Madison, however, the dream of building the Erie Canal became a New York effort.  After Mayor De Witt Clinton won the support of the New York legislature, the Erie Canal would become a reality. New York City would become the nation's busiest seaport and have the largest population.  Jobs were abundant in New York City as well as new cities developing along the trade route.  This created a tremendous population growth that continued throughout the 1800s.  The Erie Canal had a huge impact on the economy of the United States and strengthened the ties among the colonies (Volpe, n.d.). 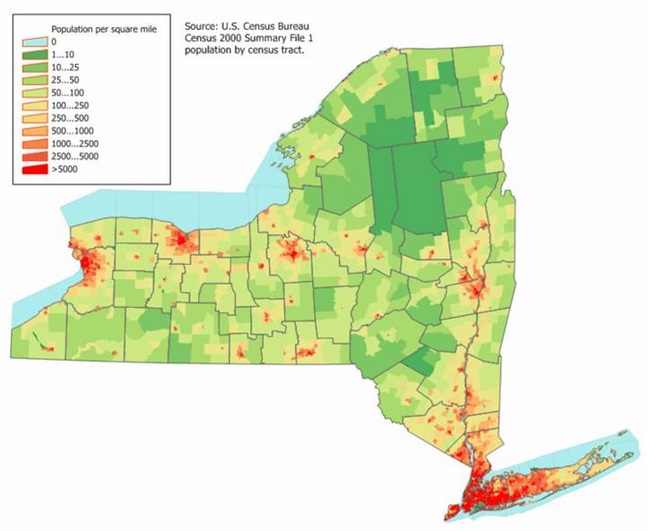 New York State population per square mile (2000). Retrieved from http://www.albanyinstitute.org/building-the-erie-canal.html
The Western part of New York was largely unsettled at the beginning of the 1800s.  People primarily lived in the East: the Catskills, Lake George, and the Mohawk and Hudson River Valleys.  After the Erie Canal was built and populations boomed in New York, major cities began to develop along the trade route.  To this day, nearly 80% of the population of New York falls within a 25 mile radius of the Erie Canal (Volpe, n.d.). 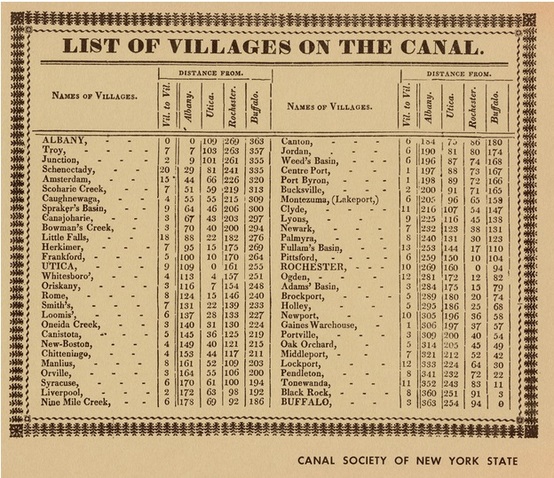 This document lists the villages along the canal and the distances from each village to Albany, Utica, Rochester, and Buffalo. Retrieved from http://www.albanyinstitute.org/building-the-erie-canal.html
The Erie canal allowed a faster route West which not only took people and goods away from Eastern New York but the new businesses and shipping market attracted workers, businessmen, and families to New York City.
The population of New York City quadrupled from 125,706 in 1820 to 515,547 in 1850.
The entire state of New York had an estimated 3 million people living in it by the year 1850 (Volpe, n.d.).
Many cities in New York grew in population as well as wealth.
Rochester and Buffalo gained prominence as commercial centers.
The fortunes of Rochester and Buffalo are bound to the Erie Canal.
Population growth between 1820 and 1850 in both cities increased exponentially:
Rochester grew from 1,502 to 36,403
&
Buffalo grew from 2,000 to 42,261 (Volpe, n.d.).