Why Build a Canal?

In the late 18th century, roads were made of dirt or gravel.  Travelers on these roads frequently had to deal with large rocks, muddy holes, tree stumps and roots, deep ruts from carriages, sandy pits, and occasionally a family of pigs bathing in the middle of the road.  Holes were sometimes filled with rocks but rarely smoothed over and sometimes filled with sand or old leaves or other vegetation that created a perfect environment for insects.   The weather added extra difficulty to traveling dirt or gravel roads.  Travelers on horseback may find themselves waist-deep in mud in a rainy season or unable to get a cart to roll through a sandy pit in a dry period in the summer.   Some travelers’ carts would break apart after crossing rocky paths and passengers would be ill after riding through rough areas.   Additionally, travel on rough roads was slow because animals had to walk slowly and carts had to be pulled carefully over the bumps (Parks, 1965).

Henry Unwin Addington, an Englishman traveling in Western New York
in the 1820s, said about the roads:

“the scene...had its solitude now and then broken, by the wreck of a coach
or wagon, sticking in picturesque attitudes in some hole in the log road...
while the forlorn passengers are hovering with hopeless laments and
draggling in the mud about the foundered and impracticable mass which
still contains their baggage” (as cited in Parks, 1965).

To find solutions to these problems, people looked to water travel.  Before the Erie Canal was built, the main modes of transportation over water were birchbark canoes and bateaux (French for "boats").  The birchbark canoes allowed Native Americans and then European settlers to travel the rivers of New York.  Bateaux boats were longer and heavier than canoes and could haul much more cargo.  These boats were rowed or pulled by several people.  The problem with these two types of water transportation was that the boats had to be unloaded at the natural rapids and falls that occurred along the rivers, hauled past the rapids and falls, and then reloaded to continue on down the river (History of the Canal, 2013). 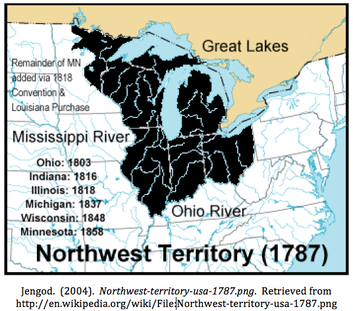 Settlers and traders had great incentives to make the difficult journey by canoe through rivers and creeks headed west through New York state:  the land around the Great Lakes was rich and good for farming and the area had abundant natural resources such as timber and animal furs that traders could gather to bring east to sell or trade.  The East was separated from the Northwest Territory by the Appalachian mountains which made the trip west difficult and lengthy (Traveling the Northwest Territory, 2013).

The idea that was the seed for the Erie Canal was first conceived in 1724 by Cadwallader Colden, a scientist, physician, and surveyor in New York who thought that the Hudson River and the Mohawk River were much better for traveling through New York and should be used more by traders than the St. Lawrence River which had a lot of rough waters.  Though he did not advocate for a canal system, he did first envision creating a way to connecting Albany and Buffalo through water (Bernstein, 2005).

In the 1700s, people became interested in using canals to overcome the problems with rough parts of the river.  Canals could also be built to connect major cities and towns by water to allow people to travel where they wanted to go.  By 1790, there were 30 companies planning or already building canals throughout the 13 colonies (McNeese, 1993). 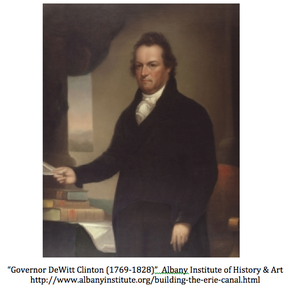 It took many years for the idea of the Erie Canal to develop and get enough political and financial support to start building.  In the early 1800s, Governor DeWitt Clinton pushed hard to get the support needed for the Erie Canal, which was later sometimes referred to sarcastically as “Clinton’s Big Ditch” (Sadowski, 2012).  Finally on July 4th in 1817, workers broke ground to begin building the canal.  The plan was for it to be 363 miles long.  Though there were other successful canals at that time (the Potomac Canal in Virginia, which was fiercely supported by George Washington, and the Middlesex Canal in Massachusetts), the Erie Canal would be the longest in America.  The canal would link small towns through New York and also allow people to travel from the Atlantic Ocean to Western New York, Pennsylvania, and the Great Lakes region, all considered at that time to be part of the “frontier” (McNeese, 1993). 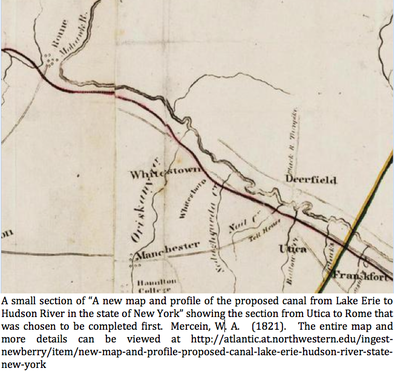 The first part of the canal was planned to be built from Herkimer to Syracuse, a 70-mile section.  This area of the canal was most level so it was easiest to dig and complete it, allowing politicians to show off the progress and gain public support to continue.  The section from Rome, NY, to Utica was completed first and then the rest of the canal was dug to complete the entire 70-mile section.  In total, the canal would drop approximately 555 feet between Albany and Buffalo.  To compensate for the drops in elevation, builders designed 83 locks (McNeese, 1993).   Builders also erected 18 aqueducts that carried boats over ravines and other rivers (Sadowski, 2012). 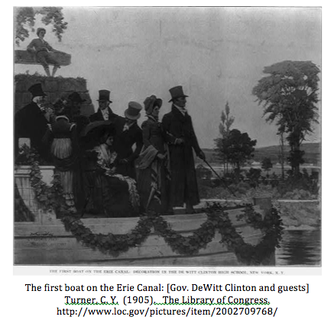 In October 1819, over two years since the canal project began, Governor Clinton and 50 other people took a boat from Rome, NY, to Utica along the part of the Erie Canal that was completed.  Following this opening, boats carrying cargo to trade began traveling up and down the completed parts of the canal.  In April of 1820, the first commercial boat carrying passengers on the canal traveled from Rome, NY, to Syracuse.  The canal would take more years to be completed, but it was already changing transportation options for people in the region (McNeese, 1993).